Most people understand how detrimental sodas can be to their health. The amount of sugar in a can of Coca-Cola is 39 grams (9 teaspoons) and a 20 ounce bottle of Coca-Cola is 65 grams (16 teaspoons). This high intake of sugars can increase the risk of disease, especially diabetes. But there are other problems with the consumption of sodas that are not nearly as pronounced or known by the public. 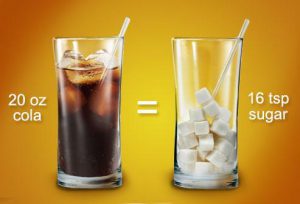 It is now a well-known fact that Coca-Cola had traces of cocaine in its early beginnings. The drink was created by a pharmacist in Atlanta who claimed it could help with headaches, fatigue, and upset stomachs. Since it had cocaine in it, the drink was addictive. It wasn’t until the Prohibition Era that Coca-Cola was forced to remove that extract.

Although cocaine is no longer in the drink, a recent study, conducted by Temple University’s School of Dentistry, did find that too much consumption of carbonated beverages, not just Coca-Cola, can have the same type of effects on teeth common with people who abuse drugs like meth and crack cocaine. These beverages include diet sodas as well.

Consistent consumers of carbonated beverages have shown signs of extensive dental erosion, equivalent to those of drug abusers.

Further studies on the subject, conducted by a public dental health group in Orebro, Sweden, found that there was a significant correlation between chronic soda consumers in their mid- to late-teens and heavy dental erosion. There was also a correlation found suggesting that dental erosion from carbonated beverages affected boys more than girls.

At Signature Smiles, our Houston dentists believe that educating all of our patients on the positives of maintaining good oral health and the negatives of not doing so is very important. Oral health impacts overall health. Our general dentists and pediatric dentists explain that keeping teeth healthy increases the opportunity for the whole body to remain healthy.

If you’ve been drinking too many sodas and haven’t been visiting the dentist, we recommend you schedule a dental appointment soon. We believe everyone should have the opportunity to have a healthy and beautiful smile.